SpellBlast allows users to practice spellings in a games based learning environment.

With clever capability tracking software, SpellBlast will monitor users abilities, adjusting the complexity accordingly. As part of the "Go Live" function, users can go head-to-head against other users of a similar level, to compete for points. The points leader boards are showcased on the SpellBlast landing page, with a world, school and class leaderboard.

To engage in the competition, simply click on the "Go Live" button. The site will match the user with other users at a similar level (you may have to wait a few seconds for this matching process to happen). Once matched, the game will load:

The object of the competition is to spell as many words within the time limit, whilst trying to beat the other players. To play, make sure your sound is turned ON (headphones are a useful addition to this activity, especially if playing in a noisy classroom!) and listen to the word. Use the keyboard to spell the word. If it is spelt incorrectly there will be one visual prompt given on screen, and another attempt may be given. If incorrectly spelt again the word will be marked as an incorrect spelling.

Once the time has run out, the competition will be graded, ranking the user out of 4. In addition to this a spelling list will be generated, showcasing which spellings were attempted, which were incorrectly spelt, etc. This spelling list can be saved using the save button. Once saved, a copy will be accessible in the users' MyFiles area. 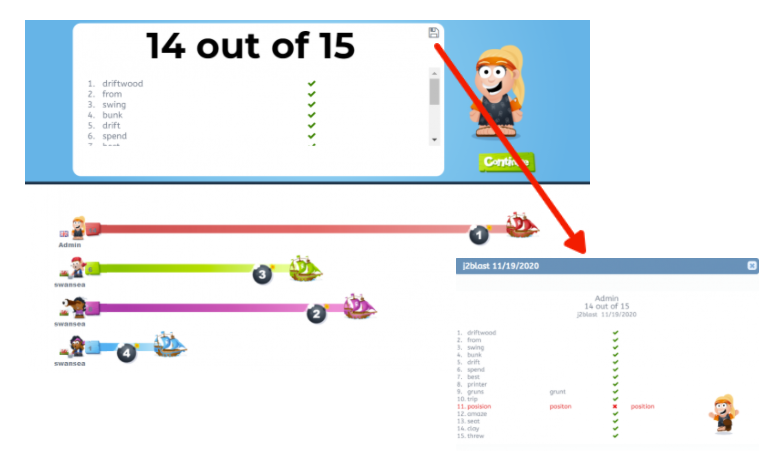 Setting your own spellings

Instructions for setting your own spelling lists can be found here

Did you find it helpful? Yes No

Send feedback
Sorry we couldn't be helpful. Help us improve this article with your feedback.